One of the most prevalent causes of vertigo is Benign paroxysmal positional vertigo (BPPV). It is an inner ear problem and presents with the symptom of a sudden sensation of spinning on change of position or while turning in bed. It occurs when calcium carbonate particles (otoconia) that are typically embedded in the gel in the utricle become displaced and migrate into one or more of the three fluid-filled semicircular canals. When these otoliths accumulate in one of the canals in the inner ear, they meddle with the natural fluid movement that these canals use to sense head motion, causing the inner ear to send false signals to the brain.

The spinning sensation or vertigo lasts less than a minute. Between vertigo spells, some people feel no symptoms, while others feel a mild sense of imbalance or disequilibrium. 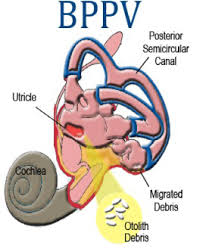 Signs And Symptoms of BPPV

However, some people may develop this condition without any apparent cause. This is called idiopathic

The symptoms of benign paroxysmal positional vertigo may include:

Episodes of spinning usually last less than one minute. Episodes of benign paroxysmal positional vertigo can disappear for some time and then recur.

It has been observed that the symptoms are triggered when the person changes his head position. Some people also feel off-balance when they are standing or walking.

When someone with BPPV moves their head into a particular position that makes the dislodged crystals stimulate balance nerve fibres, the wrong signals cause the eyes to move in a very distinct pattern, referred to as “nystagmus”.

The connection between the inner ears and the eye muscles allow us to stay focused on our environment while the head is moving. This is called the Vestibulo-ocular reflex (VOR). The stimulation by the dislodged crystals causes the sensation of movement and generation of nystagmus. The nystagmus will have different characteristics according to the placement of the displaced crystals within the semi-circular canals.

Tests like the Dix-Hallpike or Roll Tests involve moving the head into specific positions, which makes the dislodged crystals migrate due to gravity and trigger vertigo while the Doctor watches for the revealing eye movements or nystagmus. These tests when done under VNG guided magnification and recording allow an exact diagnosis of the position of the otolith particles. After ascertaining the position of the crystals, the manoeuvre required to remove the crystals would be decided.

The doctor will conduct a Dix-Hallpike test to evaluate for BPPV. The Dix-Hallpike examination is done by taking the patient on the examination couch, turning head by 45° and then taking the patient to the head hanging position by 30° down. Any involuntary eye movements indicate the presence of BPPV in the posterior semicircular canal of that side.

Other tests like the McClure Roll test are done to check if there are otoliths in the lateral semicircular canals. The deep head hanging test is done to check for anterior canal BPPV.

In Canalithiasis, the loose crystals can move freely in the fluid of the canal.

On the other hand, Cupulolithiasis is a less common pattern of otolith dislodgement. In this condition, the crystals get stuck on the cupula causing more intense and longer spells of vertigo. .In canalithiasis, it takes less than a minute for the crystals to stop moving after the head position is changed to a particular angle that has triggered vertigo. Once the calcium carbonate crystals stop moving the fluid will settle. Subsequently, nystagmus and vertigo stop too.

In cupulolithiasis, the crystals attached to the bundle of sensory nerves cause the nystagmus, and vertigo lasts longer often until the head is moved out of the offending position. It is important to make this distinction, as the treatment is different for each variant.

MRI does not help in the diagnosis of BPPV.

Medication like vestibular suppressants does not help in BPPV. They are meant to suppress the sensation of Vertigo rather than treat the BPPV.

If the cause of BPPV is ear infection or inflammation, the doctor would prescribe antibiotics and other medications. The doctor may suggest antiemetics to treat acute nausea and vomiting associated with severe vertigo cases.

Medicines do not help in the treatment of BPPV. Surgical treatment is required only in very rare cases where Maneuvres are not effective or recurrence becomes common.

BPPV can be corrected by different repositioning manoeuvres depending on the position of the particles. Once your health care provider diagnoses which canal or canals the crystals are in and what type of BPPV it is (canalithiasis or cupulolithiasis), then he can take you for the suitable manoeuvre.

The manoeuvres use gravity to guide the crystals back into the utricle via a particular sequence of head positioning called Canalith/Particle Repositioning Maneuvers.

In the case of cupulolithiasis, quick head movement at the level of the affected canal is used to dislodge the ‘hung-up’ crystals, called a Liberatory Maneuver.

Epley’s manoeuvre is one of the most commonly used manoeuvres to treat BPPV. However, that will not work for all types of BPPV.

Often people try the Epley’s manoeuvre themselves or have it performed on them by a practitioner, without seeing any success. Later assessments reveal that it is a different manoeuvre that should have been used, instead of Epley Maneuver as the Otolith was stuck in a different canal Or sometimes, the condition may have been wrongly diagnosed as BPPV, where in reality it is not BPPV at all!

Other manoeuvres used for canalith repositioning include the Semont’s manoeuvre, Gufoni manoeuvre, Vanucchi manoeuvre, deep head hanging, reverse Epley, Yacovini etc. These maneuvres are recommended for different kinds of BPPV. That is why doctors urge caution while using self-treatment or being treated by someone who is not trained in identifying and treating different variants of BPPV.

How To Do Epley Maneuver?

The steps below describe the Maneuvre for BPPV of the right posterior semicircular canal.

The doctor will help to manoeuvre your head swiftly from one side to another so that the canaliths move back to their correct position.

Sermont Maneuver: This Repositioning exercise is best done assisted by a trained doctor. Similar to the Epley manoeuvre, Semont’s manoeuvre helps the otoliths to be liberated and repositioned to their correct position.

How To Do Semont Maneuver?

How To Do Brandt-Daroff Exercise?

Surgery is indicated in rare cases where the liberatory maneuvres are not effective or multiple recurrences affect the day to day life of the patient. Some of the types of surgeries that can be performed to treat BPPV are singular neurectomy, and canal occlusion or plugging.

In the general scenario, the symptoms of BPPV are not severe. If they are severe, you should seek medical attention immediately.