In cases of sudden deafness (SD), hearing recovery is generally assessed by classifying recovery into four degrees. To evaluate factors that may affect the prognosis for hearing recovery (e.g., hearing level at initial examination, days elapsed from onset of hearing loss to start of treatment) or drug efficacy, however, a quantitative method would be more advantageous.

The head-shadow effect is one of the major mechanisms that is widely studied and understood, and with the loss of auditory function in this unilateral configuration, sounds that originate from the side of the non-functioning ear will actually fall in the shadow of the head. Low-frequency sounds, because of their long wavelength, bend very readily around the head and are largely unaffected, so the head is more or less transparent to the lower-frequency sounds that might be present (Figure 1). The higher-frequency sounds with shorter wavelengths tend to be reflected by the head in that shadow, and they get attenuated, which creates difficulty in audibility and clarity. When one considers that consonant sounds, which contain much of the meaning of English speech, occur in the higher-frequency domain, the head-shadow effect can be the root cause for the difficulty of communication, especially as it relates to speech understanding in the presence of background noise. 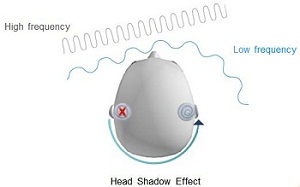 There is a combination effect of spatial hearing and the head-shadow effect that create a third problem of hearing in the presence of background noise. This is likely the other key factor that motivates one to seek treatment when they have an acquired sensorineural hearing loss on one side. Speech recognition in noise is also confounded by the lack of binaural summation. We have an incredible ability to hear in the presence of background noise when we have two ears and the full capacity of the central auditory system. However, when we have a unilateral loss in one ear, we lose the summation effect, which creates an additional confounding factor. The use of any kind of CROS (contralateral routing of signal) amplification system generally will have no helping influence on the binaural summation effect. It is a very challenging scenario that we deal with.

This discussion will not be an exhaustive list by any means, but one of the known causes of SSD is the presence of an acoustic neuroma or a space-occupying lesion in the cerebellopontine angle. Typically, these types of tumors are benign and slow growing, but the surgical removal can significantly modify or damage the auditory nerve to the point where the patient has no useable hearing on that ear. It is quite important that these space occupying lesions be removed so that they do not create other types of health problems, but the side effect of treatment is often SSD.

The second cause of SSD is what we call sudden idiopathic hearing loss. This type of loss is usually due to viral infection, but is sometimes unexplained. This sudden loss is usually an inflammatory process that occurs in the cochlea. The virus infects the cochlea and causes localized swelling, and it culminates in permanent damage to the hair cells and the fine structures of the cochlea. In many instances, the ear does not recover and the patient is left without any hearing in one ear.

Blunt trauma to the head might create a transverse fracture of the temporal bone, and that renders the cochlea completely inoperable at that point in time. Unilateral vascular insults can occur to the vascular structures in the brainstem or the cochlea that damage the auditory pathway and leave one ear completely damaged. Meniere’s disease is another process where excess fluid pressure in the ear causes long-term damage to the cochlea and renders the ear non-functional. There can also be congenital or genetic loss of hearing in a unilateral presentation. We know from early intervention and early screening programs that there are children born with profound unilateral loss and perfectly normal hearing in the other ear. 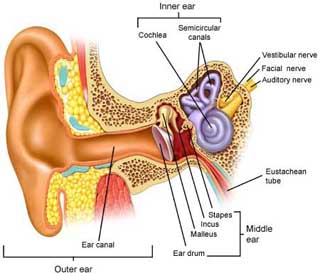 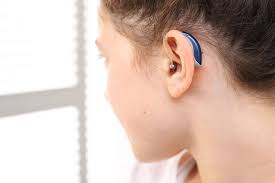 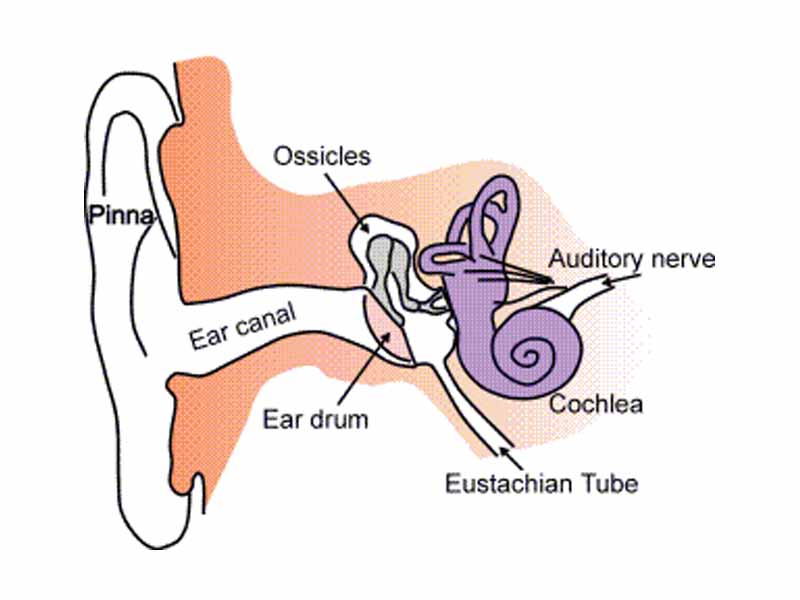